The charging plaza is operational at Veldkant in Kontich with 33 charging points at your disposal from today onward. The spots are reserved for full electric or hybrid plug-in vehicles. Cars that are fully charged are expected to free up the spots for other cars to charge.

Cronos chose to fully support electric cars in line with our core value to be a trendsetter in the most advanced technologies.

Important to know is that since 2015, not a single car had CO2 emissions higher than 170 grams, whereas four years earlier this was still more than 5 percent.

Cronos sensitises employees when choosing a new company car and encourages electric cars or cars with low CO2 emissions. Multiple charging points are available on the various campuses. We noted that some cars have been registered with CO2 emissions lower than 60 grams since the beginning of 2016. 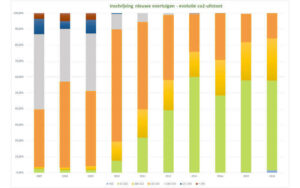 As many as 50% of the fatal work accidents occur in traffic.

During Mobility Week and on Car Free Day, we raise awareness among employees through various activities. In 2016, we organised a simulation of completing a track while wearing drunk goggles. In 2017, we set up a simulation exercise to experience the consequences of mobile phone distraction in traffic.

Accessibility of the Campuses

The campuses are accessible by car, by public transportation or by bicycle. For the best way to access your campus, please contact the campus manager or send an e-mail to cronoscare@cronos.be

Mobility week (third week of September) is an exceptional eventful week with plenty of initiatives to enhance your physical health. Helping you exercise is one of our areas of expertise! We top it off with a useful goodie bag for all coworkers who show creativity or courage by exchanging their cars for an alternative commuter vehicle on their way to work on Car Free Day.

To the Car Free Day-page

Mobility and road safety are not the only areas we work on, we also take your healthy lifestyle at heart. To encourage our coworkers to adopt healthy habits we organise sports activities and a wide variety of exercise events at your hearts’ content. Our dedicated mobility partners will also share their expertise and offer the possibility to experience high-end novelties. Make sure to stop by and marvel at all we offer.

The Mobility Center is made accessible to all coworkers by means of their entrance badge. Safe and dry parking spots for motorcycles and bikes are available. Car exchanges take place in the Mobility Center as well, before handing them over to the next driver, a car expert performs an assessment or audit.

As your car leasing includes windshield replacement insurance, Carglass repairs the damage without additional cost. Call 0800 136 36 to make an appointment and leave your car in the Mobility Center in the morning.

Does your car need deep cleaning? Take a look at our services webpage.

Cronos supports coworkers who come to work by bicycle with the necessary infrastructure. The Mobility Center is the dedicated area with designated dry and safe parking spots for your favorite commuter vehicle. Need to freshen up or store your helmet in a safe place? You can use the showers and lockers in the Mobility Center or in the office building at Veldkant 39.

For short-distance commuter between office buildings you can use commuter bikes with bags which you can find in the headquarters in the Mobility Center, at Veldkant 39 and also at Prins Boudewijnlaan 41. Our offices in Leuven will follow soon.

Do you have questions or suggestions for your campus? Contact fleet department at wagens@cronos.be

Cronos opts for an individual approach to best respond to the needs of all employees. A company car is not necessarily the preferred choice for everyone. Some rather use a bicycle or prefer a public transportation season ticket.

Find out more about the various options, ask your manager or contact our colleagues of the Fleet Management Department at wagens@cronos.be

We use cookies on our website to give you the most relevant experience by remembering your preferences and repeat visits. By clicking “Accept All”, you consent to the use of ALL the cookies. However, you may visit "Cookie Settings" to provide a controlled consent.
Cookie SettingsAccept All
Manage consent

This website uses cookies to improve your experience while you navigate through the website. Out of these, the cookies that are categorized as necessary are stored on your browser as they are essential for the working of basic functionalities of the website. We also use third-party cookies that help us analyze and understand how you use this website. These cookies will be stored in your browser only with your consent. You also have the option to opt-out of these cookies. But opting out of some of these cookies may affect your browsing experience.
SAVE & ACCEPT